A leader in technological and process transformations 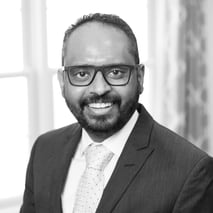 Shajan leads the digital business for the firm, while providing strategic and advisory services to clients in select industries.

For 20 years, Shajan has led large-scale business transformations and go-to-market growth strategies that improve market share, revenues and EBITDA globally. He has an award-winning reputation for effectively deploying cutting-edge technologies and methodologies to better leverage financial and human capital.

From 2015 to 2020, Shajan led a refresh of IBM’s finance and accounting offering to Fortune 100 clients that significantly improved win rates. As a senior executive and coach to client CXOs, he designed and developed solutions—many of which involved blockchain, artificial intelligence/machine learning, at scale automation/robotics and advanced analytics—that helped launch new plays, revitalize growth, and drive overall profitability.

Previously, as VP and Business Leader at GE Capital International Services (now Genpact LLC), Shajan had P&L responsibility for the North American delivery centers. His championing of Lean Six Sigma and digital transformation moved the needle on Net Promoter Scores to more than 76% with the center’s 40+ clients across ten industries. He also drove profitability for Genpact’s Creditek acquisition through aggressive cost restructuring, contract renegotiations, and a platform play that added 13 new clients.

Earlier, as VP of Operations at Genpact India, Shajan led the design and set up of a shared service center, as well as digital and process transformation cost reduction programs, for GE’s industrial businesses. Shajan began his career managing supply chains and owning productivity and Kaizen rollouts as an engineer at Tata Motors.

He currently runs an informal syndicate of 100+ investors from around the world, and is actively involved with more than a dozen startups as a board member (including Smitch, CausEcho) or advisory board member (including Numberz, WearWorks). Shajan obtained an MBA with a major in finance from XLRI and a Bachelor of Engineering from the Indian Institute of Technology, Roorkee.

Reach out to a team member to work with Shajan.